Bringing the Light Back to the Schuster Center

This summer, we were proud to partner with Victoria Theatre Association (VTA) on a very special project: replacing and updating the dome and architectural accent lights that are part of the house lights for the Mead Theatre in the Benjamin and Marian Schuster Performing Arts Center in Dayton, Ohio.

In addition to the Mead Theatre (2,300 seats), the Schuster Center is home to the Mathile Theatre (a 150-seat black box), and the very popular Citilites Restaurant and Bar. Bringing these three spaces together is the Kettering Wintergarden, a beautiful, open air, six-story glass atrium which serves as a lobby and special events space. The Schuster Center was designed by architect César Pelli, and built in 2003. It is the principal center for Dayton’s performance arts, and showcases VTA’s Premier Health Broadway Series, Dayton Ballet’s “The Nutcracker,” the Dayton Opera, and the Dayton Philharmonic, among other concerts and events. 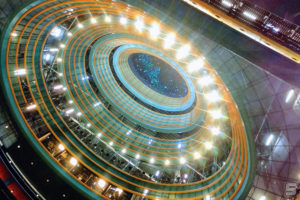 The Mead Theatre is a state-of-the-art proscenium theatre. It was designed to resemble a European-style opera house with continental seating, side galleries, and box seating on three levels. In this theatre, architect César Pelli utilized fiber-optics in the domed ceiling to create a feeling of an evening under the stars. “The Mead Theatre is full of tributes to Dayton and the Wright Brothers,” explains VTA President and CEO Ty Sutton. “The star field at the top of the concentric rings or dome is meant to represent the way the night sky looked when the Wright Brothers took their first flight.” With the stars overhead, this theatre is a magical space! 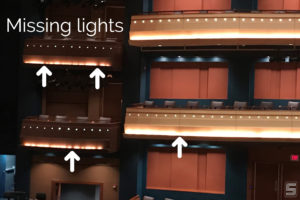 Our project involved updating the lights in the concentric rings surrounding the fiber-optic stars, as well as the accent cove lights that showcased the architectural line of the boxes, galleries, and balconies. When the Schuster Center was built, incandescent lights were the only option for illumination in these positions.

Incandescent lights produce a lot of heat and are high in energy consumption. In the sixteen years since the Schuster Center opened, lights in the dome’s concentric rings and accenting the audience levels have burned out. Around five years ago, so many lights had burned out in the concentric rings that the effect was ruined. Because of their position, lights in the rings were extremely difficult—if not impossible—to replace. The rings were turned off and no longer used. The dome went dark. Over time, audiences got used to the rings being gone. 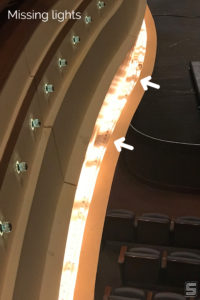 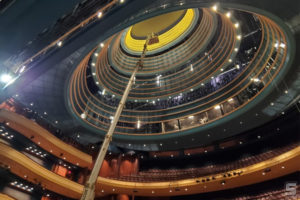 Technology has changed since the Schuster was built. LED (light emitting diode) lights are now readily available and economically preferable. They don’t produce heat like incandescent lights, they don’t require as much energy to run, and they have a very long life. The decision was made to replace the incandescent lights in the Mead Theatre with LEDs, a project that was funded by Victoria Theatre Association’s Next Stage endowment campaign.

“VTA has worked with Scenic Solutions numerous times through the years,” explained the Schuster’s Production Manager and Technical Director Patrick Keough. “When we were looking for a partner to complete this time-intensive process of taking out all the old light roping – some of which hasn’t been operational for a few years – and replacing it with the new LED roping, Scenic Solutions was really our first choice. They’re great to work with and have an incredible international reputation for creating scenic design elements for all kinds of touring shows. They know their stuff – we were confident they could get the job done right and quickly.” 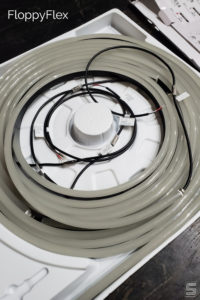 For the project, we worked with House Electrician Steve Williams, to research what lights would work best. “The challenge was to find lights of the right color temperature—the right warm color—to retain the vision of the architect,” Williams explained. This was especially true for the cove accents lights that outlined the boxes, galleries, and balconies. 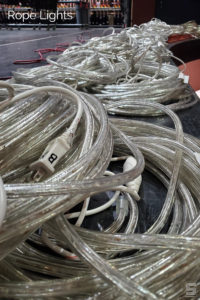 To update the dome’s concentric rings, we used nearly five thousand feet (or thirty three spools) of warm white LED rope light. For the boxes, galleries and balcony we went to TMB (Scenic Solutions is an authorized vendor) and purchased almost six hundred and ninety feet of their FloppyFlex.

Nearly all the lights being replaced were inaccessible. To do the job, we needed two articulated boom lifts with a reach of ninty-feet. To use the lifts, we had to remove most of the seating in the orchestra section of the Mead Theatre. 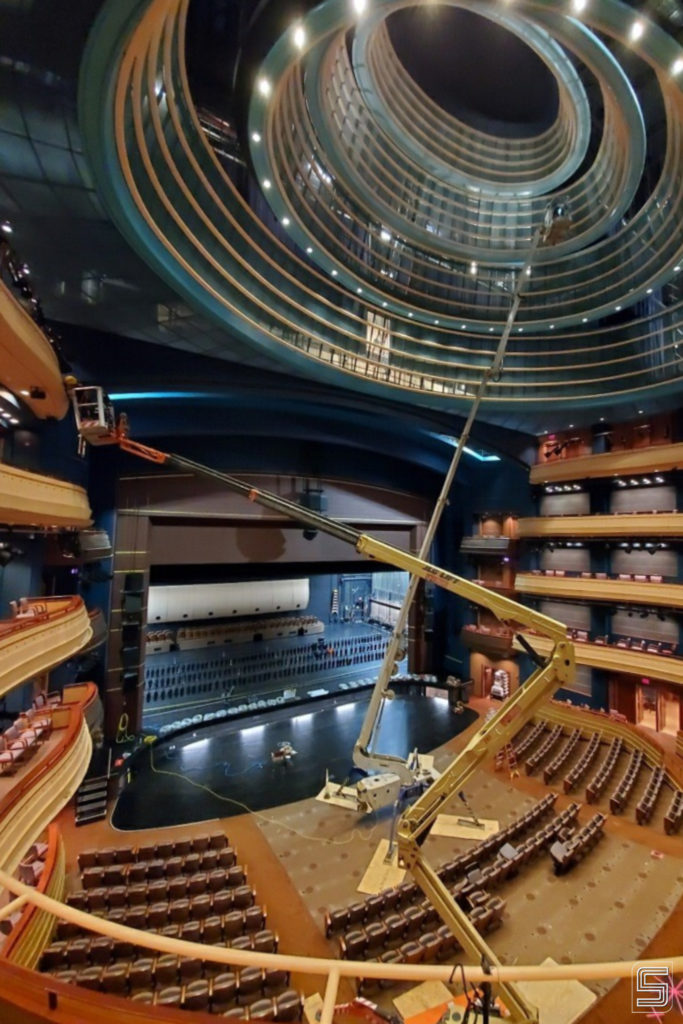 Since none of these lighting positions had been accessed since 2003, there was a lot of dust. “It’s impressive the amount of dirt you can find on things that have been up in the ceiling for sixteen years,” remarked Scenic Solution’s Project Manager, Scott Woxman. “There hasn’t been an opportunity to clean things since the building was originally built. We noticed it the first time we got up into the rings and started pulling down the rope light, and it was fuzzy. It was well above the dust bunny stage. The dirt came down like gray snow.” With a smile Woxman continued, “We’ve been able to clean the glass on the front of the follow spot booth for the first time in sixteen years, because you can’t reach it unless you’ve got a ninety-foot lift.” 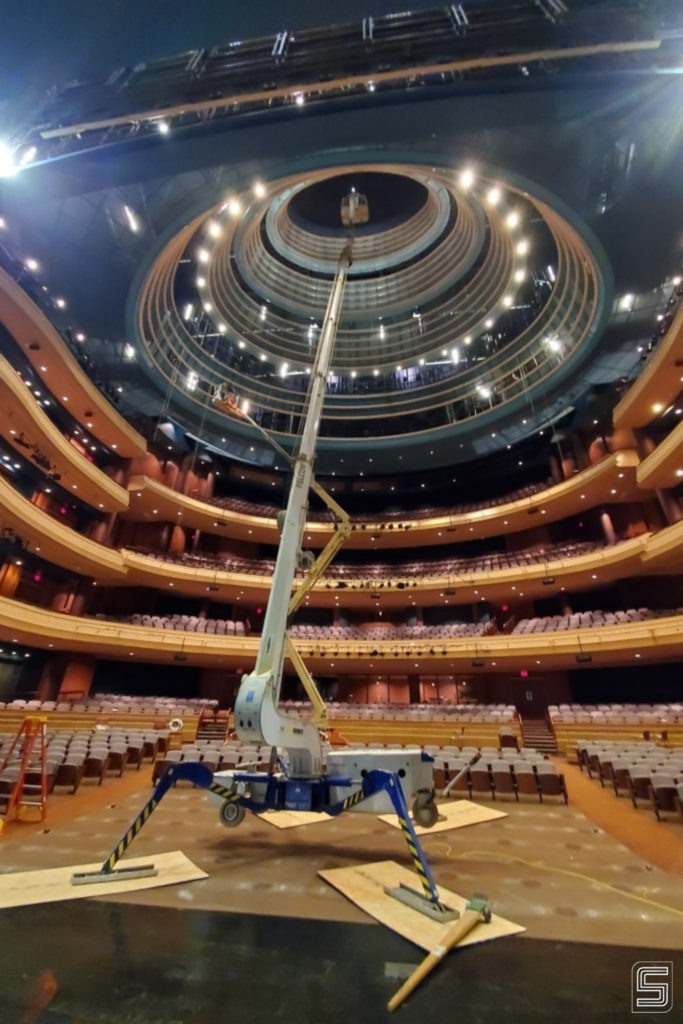 Over a three-week period, the accent cove lights that showcased the architectural line of the boxes, galleries, and balconies were replaced with FloppyFlex. The concentric rings in the dome were upgraded to two circuits of LED rope light, which will allow maintenance to be performed without the use of a lift. Now, if a section in circuit A burns out, it can be unplugged and replaced by a section in circuit B. 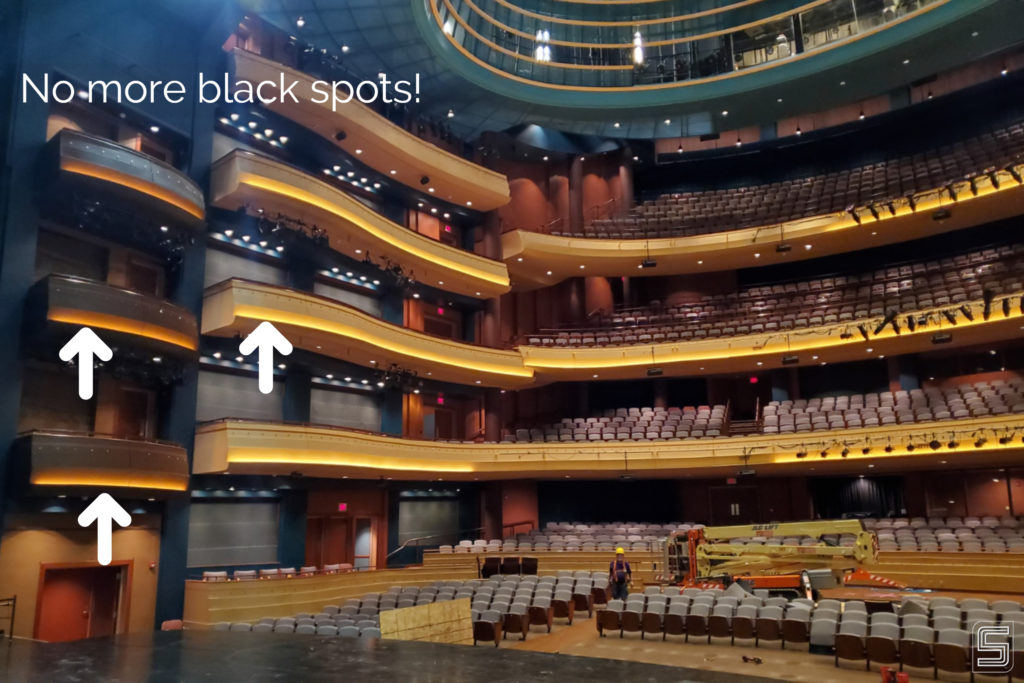 The last step involved an upgrade to the dimmer system. Because the new lights would operate in conjunction with the house lights, the LEDs needed to be fully dimmable. We installed seventeen 10A Electronic Reverse Phase Modules to the Mead Theatre’s dimmer system. These modules are manufactured by our friends at Electronic Theatre Controls expressly to dim LED loads (Scenic Solutions is an authorized vendor for ETC). The concentric rings in the dome and the cove accent lights can now be programed to dim from one hundred percent down to zero percent and can also do a variety of chasing actions. Imagine a house left to house right “wave!”

This project represents a $200,000 investment, not just because of the purchase of new equipment and services, but also because the Mead Theatre had to be closed for nearly a month. However, the improvement in patron experience and energy savings makes the investment worthwhile. “Having the rope lighting upgraded to LED on each of the rings in the dome really makes the architecture pop and shows off the star field the way it was meant to be seen,” explains Ty Sutton. “But even more importantly, upgrading to LED means an eighty percent savings in energy use and a ninety percent reduction in heat load from those lights. And because of their long life, we’ll also save in labor costs to replace them.”

Scenic Solutions owner, Mary Beth McLaughlin, agrees. “This was definitely a smart investment for VTA. And we were delighted to be part of the project. With this upgrade, the Mead Theatre will again shine like a jewel here in the Gem City.” 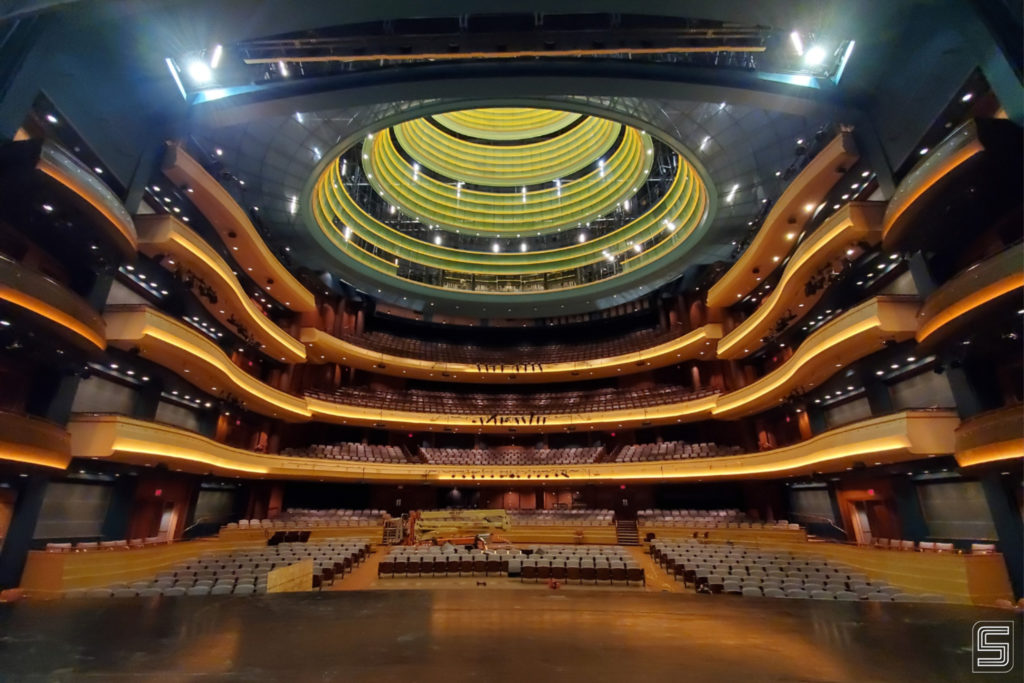